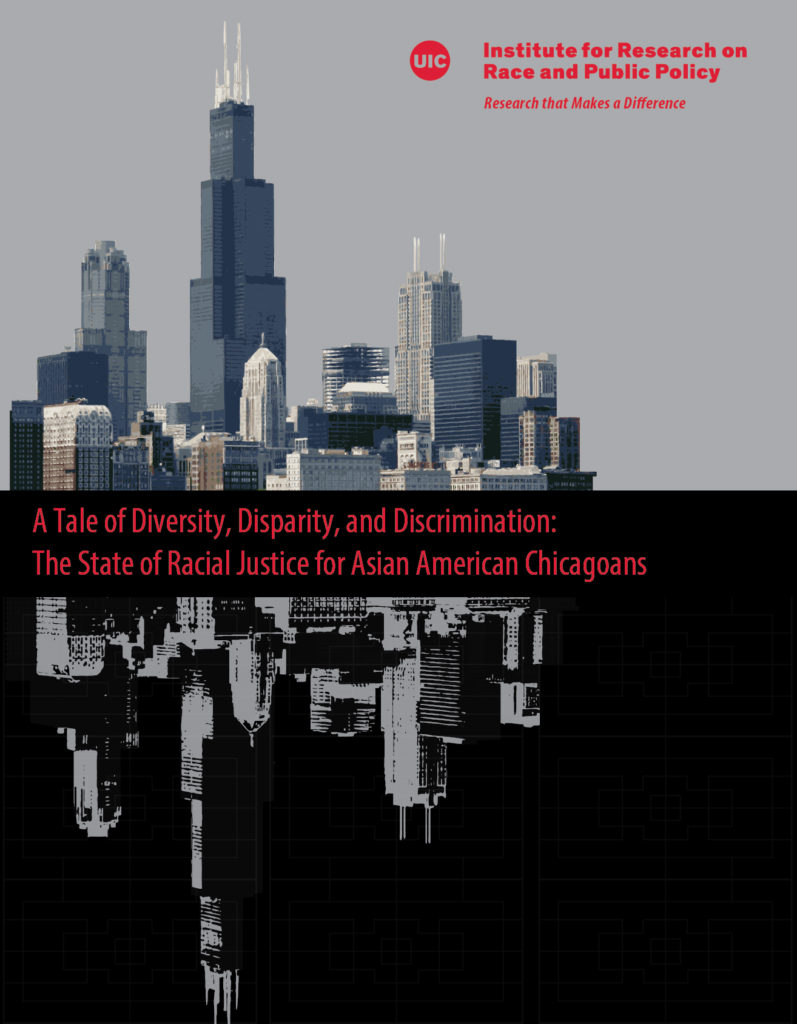 Presentation and Panel Discussion on The State of Racial Justice for Asian American Chicagoans Report
On June 6 at the Goodman Theatre, IRRPP presented findings from our new report documenting experiences of racial discrimination and inequities for Asian Americans in Chicago. After the presentation, a panel discussion including representatives of the Alliance of Filipinos for Immigrant Rights and Empowerment, the HANA Center, Asian Americans Advancing Justice | Chicago, and the Coalition for a Better Chinese American Community responded to the findings in the report and shared their efforts to advance racial and economic justice for Asian Chicagoans.

Amanda Lewis begins the presentation at the 44-minute mark in the video below.

Fifty years later, what the Kerner report tells us about race in Chicago today

“Our nation is moving toward two societies, one black, one white – separate and unequal.”
– Report of the National Advisory Commission on Civil Disorders

One would be forgiven for assuming this sentence was written in 2018 rather than in 1968, as part of what is generally known as the Kerner report. …

On October 11, a study of twelve predominantly Latinx community areas in Chicago was published by the Institute for Research on Race and Public Policy (IRRPP) and the Great Cities Institute, research centers affiliated with the University of Illinois at Chicago (UIC). “The Latino Neighborhoods Report” examines income levels, employment opportunities, homeownership rates, and health insurance coverage in each of the twelve community areas; most notably, it finds that education rates among Chicago’s Latinx communities lag well behind their Black and white counterparts. … Continue Reading:

CHICAGO — More than two years after Chicago launched a program that offers a swath of high school students a free ride at its community colleges, city officials are touting their growing list of students moving on to four-year universities with two years of college credit and not a dollar in debt.

Yet another, more subtle, trend has emerged from the program known as the Star Scholarship: Chicago’s junior colleges have become an extraordinarily popular spot for high-achieving but cash-strapped undocumented immigrants to study. …

Jose Acosta, author of The Latino Neighborhoods Report: Issues and Prospects for Chicago, joins WGN’s Adelante Chicago to discuss the release of the report. Watch the full interview at the link below. https://www.facebook.com/lpoderuic/videos/1424840887613306/

As Chicago’s Latino population grows (it recently surpassed blacks as the largest minority group in the city), politicians need to focus on the evolving needs and distribution of that group, according to a new study released by the University of Illinois at Chicago.

Commissioned by Metropolitan Family Services, the “Latino Neighborhoods Report” was led by José Acosta-Córdova, author and research assistant at UIC’s Institute for Research on Race and Public Policy. The report profiled 12 neighborhoods where Latinos make up the majority of the population: …

Members of the Chicago City Council Latino Caucus; Ric Estrada, President and CEO of Metropolitan Family Services; José Miguel Acosta-Córdova, Research Assistant at the UIC’s Institute for Research on Race and Public Policy, a James J. Stukel Student Fellow at the Great Cities Institute, Graduate Student in Urban Planning and Policy, and President of UIC’s Latino planning student organization, LPODER held a press conference Wednesday to announce the release of a new University of Illinois at Chicago report to Metropolitan Family Services titled: The Latino Neighborhoods Report: Issues and Prospects for Chicago. This report, ordered by Metropolitan Family Services to further its delivery of social services, presents demographic characteristics of Latinos in Chicago and scrutinizes the neighborhoods with a majority Latino population. … Continue Reading:

LOGAN SQUARE — Chicago’s Hispanic population is surging, and while the ethnic or racial group faces many quality-of-life challenges, it has also seen some successes, according to a new report.

José Miguel Acosta-Córdova, a graduate student studying urban planning and policy at the University of Illinois at Chicago, is behind the report, “The Latino Neighborhoods Report: Issues and Prospects for Chicago.” It was produced for the nonprofit Metropolitan Family Services “to further its delivery of social services.”

Hispanics have bypassed blacks as Chicago’s second-largest racial or ethnic group and spread out into more neighborhoods. But education, jobs, health care and other city services have not caught up to that growth.

That’s the bottom line of a comprehensive new report released Wednesday by the University of Illinois at Chicago’s Institute for Research, Race and Public Policy and UIC’s Great Cities Institute. …

CHICAGO (CBS) — The city’s Latino aldermen said Wednesday a new study shows there must be a re-thinking of resources and services available to people in Hispanic neighborhoods.

A report by the University of Illinois at Chicago, titled “The Latino Neighborhoods Report: Issues and Prospects for Chicago,” showed the Latino population is growing substantially and spreading widely through the city’s neighborhoods. …

A University of Illinois at Chicago report examines “pervasive” racial inequalities in the city when it comes to housing, economics, criminal justice and health care.

The 184-page report released Monday looks at three groups which each make up roughly one-third of Chicago’s population: blacks, whites and Latinos…

CHICAGO — A new report on race in Chicago concludes that while there has been some progress since the civil rights movement, in some cases, it has grown worse.

The report, “A Tale of Three Cities: The State of Racial Justice in Chicago” produced by University of Illinois at Chicago researchers, examines a number of troubled areas in Chicago including…

Wealthy blacks just as likely to be segregated as poor here

In Cook County, affluent black people are more likely to live near poor blacks than near white people of their income level—or any income level—according to a new study from the University of Illinois at Chicago… Continue Reading:

All Things Unequal: Fifty years of racial inequality from the UIC’s State of Racial Justice Report

On Monday, the University of Illinois at Chicago’s Institute for Research on Race & Public Policy (IRRPP) released “A Tale of Three Cities: The State of Racial Justice in Chicago Report,” a study that analyzes disparities in housing, economics, education, justice, and health between Black, Latinx, and white communities in Chicago. Using robust quantitative evidence from a variety of sources, each section delves deep into the history, causes, and consequences of these racial and ethnic inequities that “remain pervasive, persistent, and consequential” in Chicago’s institutions and neighborhoods.” Continue Reading:

For middle-class blacks, success can be a double-edged sword

Across the country, young people and their families are celebrating the annual ritual of college graduation. These graduation ceremonies bring with them the promise of new opportunity, and for many young people who are one of the first in their family to finish college, social mobility.

For many African-American families, securing a college degree holds the promise of securing a middle-class life with financial stability. Work hard. Invest in the future. Delay gratification. These precepts are pillars of the colorblind promise of equal opportunity, self-determination and The American Dream…

Black Chicagoans Segregated, Regardless of Income.
Latino Chicagoans are more likely to live in diverse neighborhoods than whites or blacks do.

Chicagoans of all ethnicities tend to live in more segregated neighborhoods than they say they would like to, according to research from a study by Kasey Henricks and Amanda Lewis titled “A Tale of Three Cities: The State of Racial Justice in Chicago.” Continue Reading: